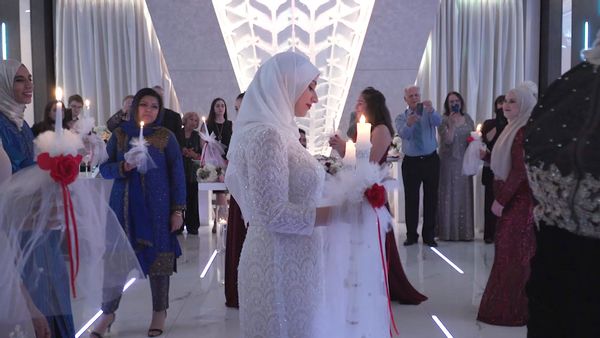 Aber in Nausheen Dadabhoy’s “An Act Of Worship” (Capital K Pictures)
How did you find the three participants in your film, Aber, Khadega, and Ameena?
We found a lot of women working in community organizing spaces and as activists. I was working with CAIR, the Council on American Islamic Relations, in Los Angeles. My sister was an attorney at the chapter. Her boss was Ameena Mirza Qazi, the attorney in the film. When the protests were happening at the airport, I saw Ameena in action and was in awe. “Let me put a mic on you and film you.” Luckily, she was along for the ride. We filmed for many years. CAIR LA helped us find other activists. We went to different communities and asked, “Who were the activists?” Literally every community said, “There is this amazing young woman . . .” Where are the men? There are women leading the charge, so this film is going to be about them. They are on the front lines. I’m not exaggerating.
The film touches on the headscarf debate. I liked it when one interviewee said she chooses to wear the headscarf as a form of resistance, which makes it a political act. What are your thoughts on this? It can be so polarizing.
I used to wear a scarf also. That predates 9/11. I wore one when I was in high school, and for me, it was very much an act of devotion. Talking to people making this film, for some cultures, primarily Arab cultures, it’s just part of the culture. It doesn’t have to do with religious devotion. In Pakistan, a lot of women don’t cover their hair. They cover it differently. It’s culturally how they do it. In some Arab cultures, you hit puberty and you start covering your hair; it’s not religious, it’s cultural. But what did happen, and I remember having this conversation with a friend of mine after 9/11, it was very political. I want to be outwardly Muslim. I want to show my faith and have people see that I am Muslim and I’m not going to hide it. For some people it was, “I’m going to show them the best part of Islam. I’m going to wear the scarf and be a good person so now try coming at me with your anti-Muslim sentiments.” That’s so unfair, the work you have to do to take all that on. I didn’t do that, but I think a lot of women did.
Want a daily wrap-up of all the news and commentary Salon has to offer? Subscribe to our morning newsletter, Crash Course.
What message of hope do you have for your community?
Ultimately, my film is about creating a different narrative for ourselves and for us to see ourselves in all the beauty and nuance in our story that hasn’t really been seen enough in American popular culture and media. But I also remember that during one of the versions of Trump’s Muslim Ban, I was filming with Ameena, and I had read about the Ban and was so depressed and I filmed an interview with her, and I was like “We’re going to be OK.” There are amazing people like her and so many others who are not going to let things like this stand. I find my hope in our community.
More stories to check out:
Gary M. Kramer is a writer and film critic based in Philadelphia. Follow him on Twitter.
Copyright © 2022 Salon.com, LLC. Reproduction of material from any Salon pages without written permission is strictly prohibited. SALON ® is registered in the U.S. Patent and Trademark Office as a trademark of Salon.com, LLC. Associated Press articles: Copyright © 2016 The Associated Press. All rights reserved. This material may not be published, broadcast, rewritten or redistributed.