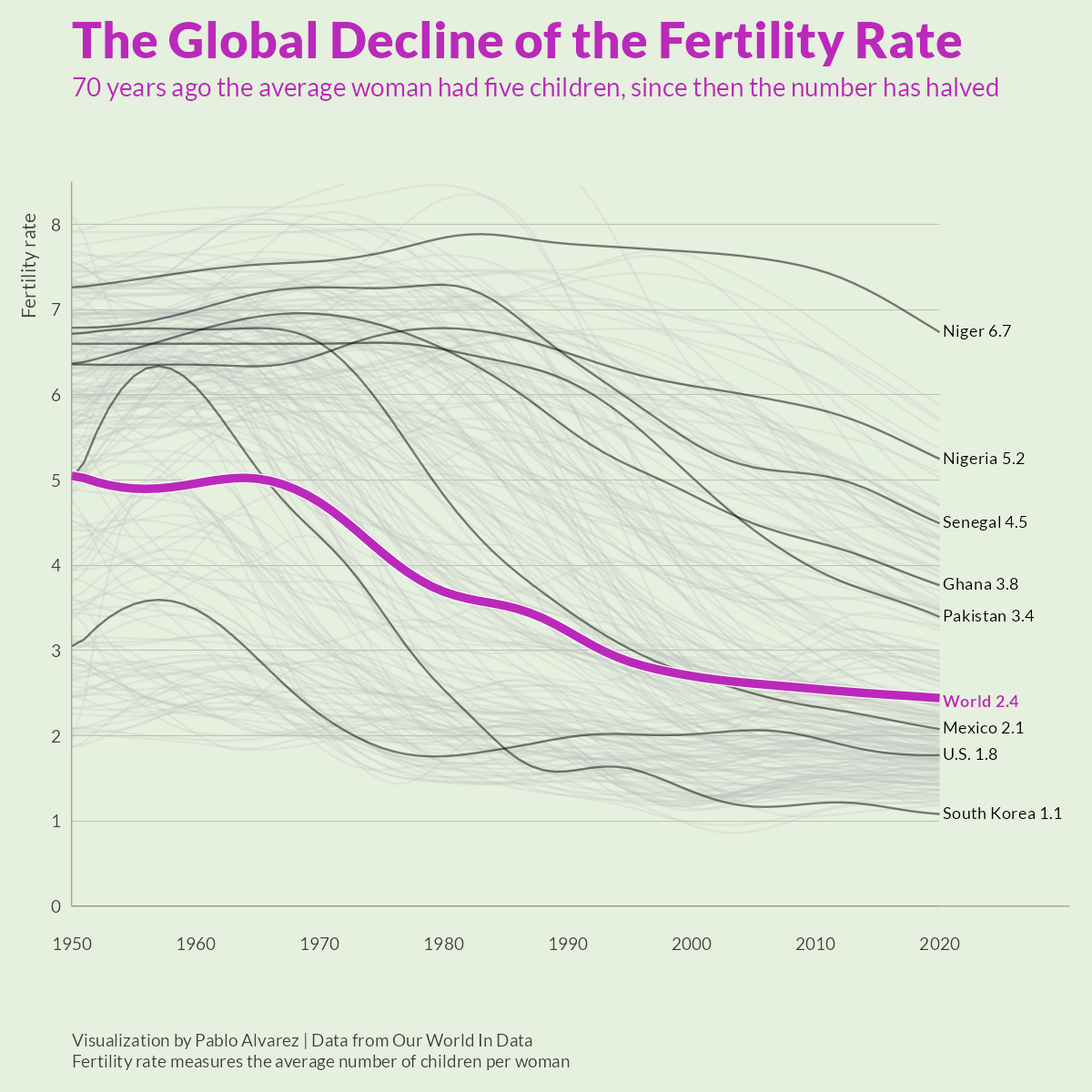 Over the last 50 years, fertility rates have dropped drastically around the world. In 1952, the average global family had five children—now, they have less than three.
This graphic by Pablo Alvarez uses tracked fertility rates from Our World in Data to show how rates have evolved (and largely fallen) over the past decades.
Though both measures relate to population growth, a country’s birth rate and fertility rate are noticeably different:
As such, the fertility rate is a more specific measure, which as Britannica highlights, “allows for more efficient and beneficial planning and resource allocation.” Not including immigration, a given area needs an overall total fertility rate of 2.1 to keep a stable population.
For the last half-century, fertility rates have steadily decreased worldwide. Here’s a look at the average number of children per woman since 1952:
Why are women having fewer children? There are a number of theories and empirical research studies to help explain this decrease, but according to Dr. Max Roser, the founder of Our World in Data, most of the literature boils down to three main factors:
Research has found that higher education in women is correlated with lower fertility. For instance, in Iran in the 1950s, women had an average of three years of schooling and raised seven children on average.
But by 2010, when Iranian women had nine years of schooling on average, the average fertility rate in the country had dropped to 1.8.
This theory is further supported when you look at countries where women’s education is still relatively lagging. For instance, in 2010, women in Niger had 1.3 years of education on average, and an average of more than seven children—more than double the global average at that time.
Lower fertility rates, coupled with increased life expectancies around the world, are creating an aging population. Since 1950, the global median age has grown from 25 years to 33 years.
An older population comes with a number of economic risks, including rising healthcare costs and a smaller global workforce.

According to a report by the World Bank, the world’s working-age population peaked back in 2012. Since then, it’s been on the decline.
A smaller working population puts more pressure on those who are working to support those who are collecting pensions. This could ultimately lead to an economic slowdown if countries don’t prepare and alter their pension systems accordingly, to account for our aging population.
This article was published as a part of Visual Capitalist’s Creator Program, which features data-driven visuals from some of our favorite Creators around the world.
What is PANS/PANDAS and Why Should You Care?
Interactive Map: Crude Oil Pipelines and Refineries of the U.S. and Canada
DoorDash is Dominating the U.S. Food Delivery Market
The Science of Nuclear Weapons, Visualized
Mapped: Where America’s Truckers Live, by State
Visualizing Ukraine’s Top Trading Partners and Products
Ukraine has made the headlines due to the ongoing tensions with Russia. In this map infographic, we examine Ukraine from a structural point of view.
Published
on
By
The modern state of Ukraine was formed nearly 30 years ago after the collapse of the Soviet Union in 1991. Since then, the country has often made headlines due to political instability and the looming threat of a Russian invasion.
In the map graphic above, we examine Ukraine from a structural point of view. What’s the country’s population composition? What drives the country’s economy? And most importantly, why is the country important within a global context?
With a population of nearly 44 million people, Ukraine is the eighth-most populous country in Europe. For perspective, that is slightly smaller than Spain, and four times larger than Greece.
As the cartogram below demonstrates, a large portion of the country’s population is located in and around the capital Kyiv, along with the Donetsk region—which is front and center in the current conflict with Russia. 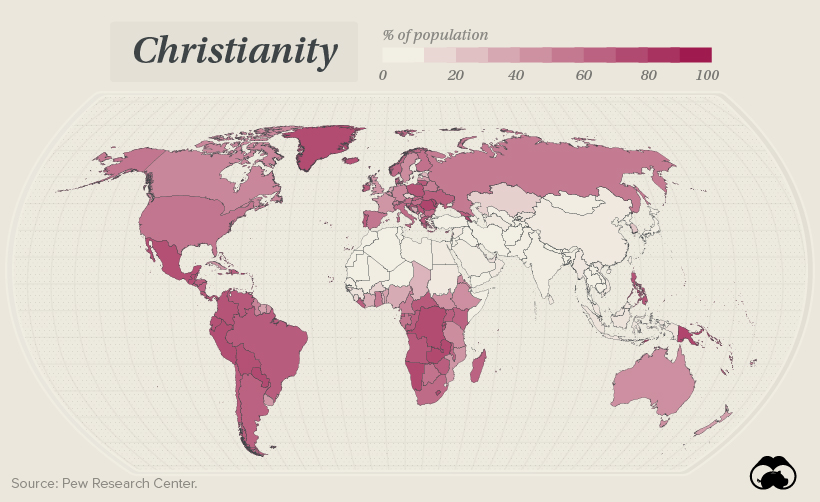 Christianity has historically spread around the globe and today it remains a geographically widespread religion. Over the past century, it has become less concentrated in Europe while becoming more evenly distributed throughout the Americas, sub-Saharan Africa, and the Asia-Pacific region.
Even though it’s the predominant religion of countries in the Middle East and Northern Africa, by sheer number, countries in Asia have the highest percentage of practicing Muslims in the world.
It may surprise you to know that 14.2% of Indians are Muslim. As a result, the country is home to one of the world’s largest Muslim populations, surpassed only by Indonesia. Islam is also the world’s fastest-growing major religion. The number of Muslims is expected to increase by 70%, from 1.8 billion in 2015 to nearly 3 billion in 2060. The fact that they have the youngest median age, at 24, also helps this population growth.
While Jews historically have been found all around the globe, Judaism is highly geographically concentrated today. More than four-fifths of all Jews live in just two countries: the United States and Israel. Israel is the only country with a Jewish majority, with 76% of the population being practicing Jews. 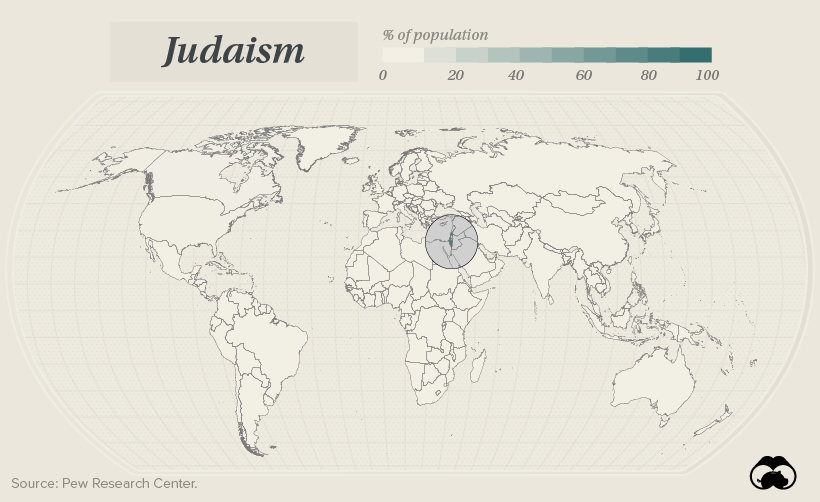 The largest remaining shares of the global Jewish population apart from the U.S. and Israel are in Canada (about 3% of the country’s population), France (2%), the United Kingdom (2%), Germany (2%), Russia (2%) and Argentina (between 1% and 2%).
The religiously unaffiliated population includes atheists, agnostics, and people who do not identify with any particular religion. 720 million of the Chinese population consider themselves religiously unaffiliated, while 78% of Czechs feel the same way. 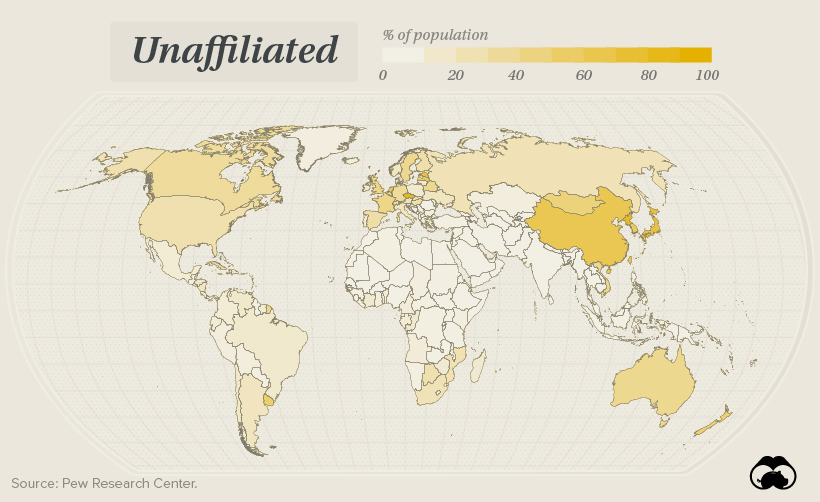 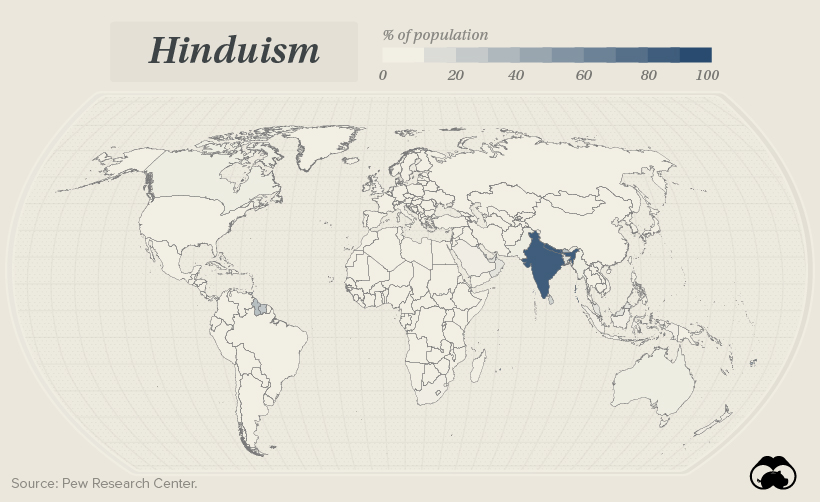 Although Hinduism is rarely a country’s primary religion, it still enjoys a global presence. Many regions around the world support significant populations of Hindus, including the Caribbean, Southeast Asia, North America, and South America.
According to estimates, half the world’s Buddhists live in China. Still, they make up only 18% of the country’s population. Most of the rest of the world’s Buddhists live in East and South Asia, including 13% in Thailand (where 93% of the population is Buddhist). Buddhism in Asia is a matter of both identity and practice. Scholars and journalists have documented that many Asian countries may engage in Buddhist practices without considering themselves part of any organized religion.
Folk religion is any ethnic or cultural religious practice that falls outside the doctrine of organized religion. Grounded on popular beliefs and sometimes called popular or vernacular religion, the term refers to how people experience and practice religion in their daily lives. 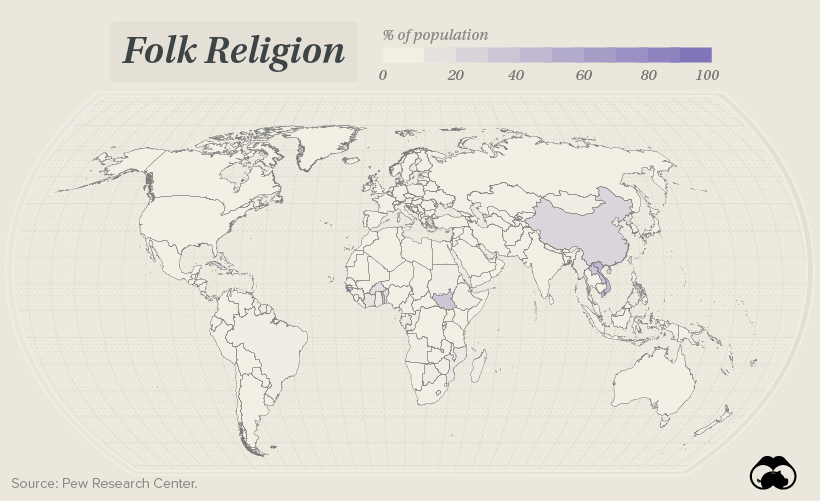 As of 2020, an estimated 429 million people, about 6% of the world’s total population, were adherents of folk or traditional religions. Some notable folk religions include African traditional religions, Chinese folk religions, Native American religions, and Australian aboriginal religions.
The Top 10 Largest Nuclear Explosions, Visualized
Made in America: Goods Exports by State
Mapped: The State of Global Democracy in 2022
Explainer: What to Know About Monkeypox
Visualizing U.S. Crude Oil and Petroleum Product Imports in 2021
Ranked: These Are 10 of the World’s Least Affordable Housing Markets
Visualizing China’s $18 Trillion Economy in One Chart
Mapped: The 10 Largest Gold Mines in the World, by Production
Copyright © 2022 Visual Capitalist