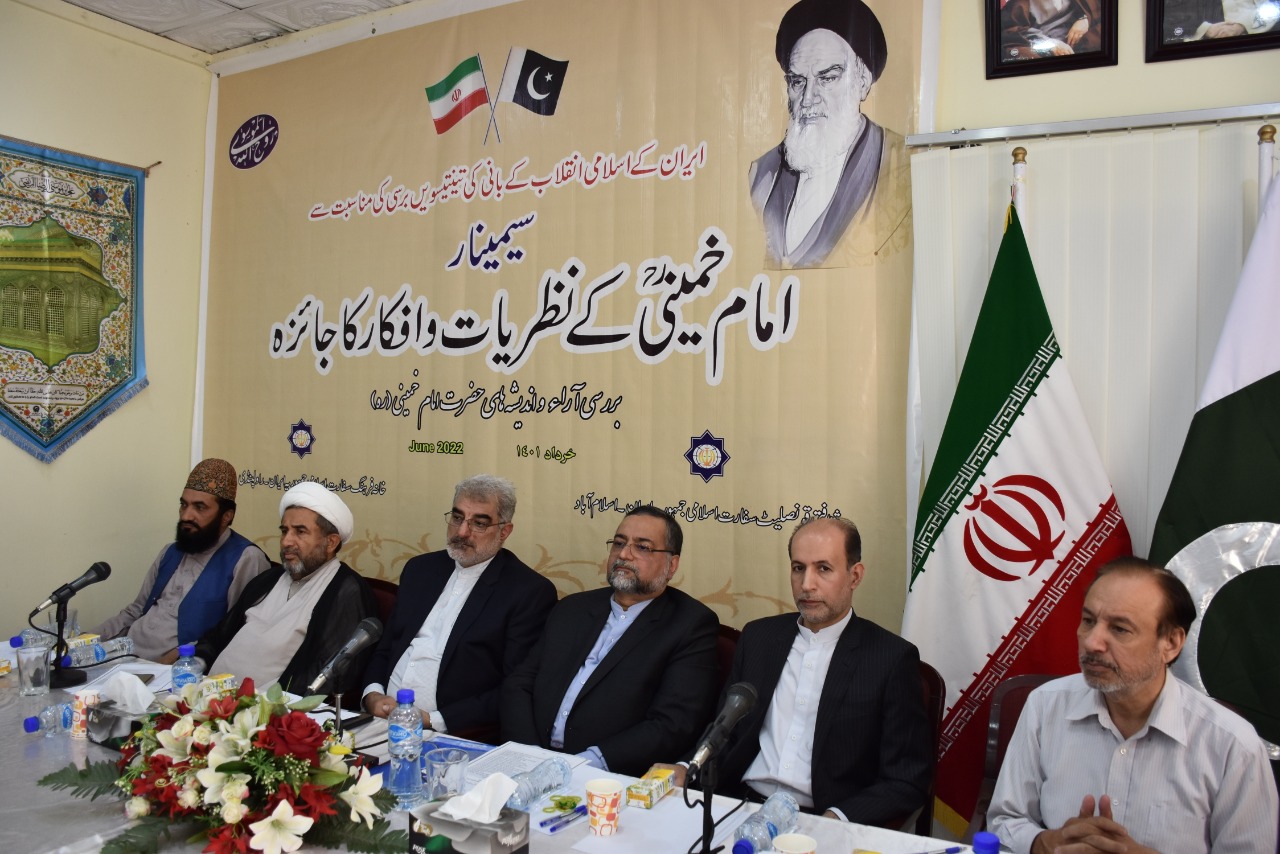 RAWALPINDI: Addressing a seminar on the anniversary of Imam Khomeini (RA), the founder of the Iranian Revolution, held at Khanah Farhang, Islamic Republic of Iran, Rawalpindi, the Acting Iranian Ambassador and Special Guest of the event, Mohammad Surkhabi, said that the Iranian Islamic revolution continues in full power despite the evils of the United States and the Zionist regime, and this revolution has always been the voice of the oppressed people of the world.
He feathers said that Imam Khomeini was brave and fearless and tried with skill and experience to thwart American conspiracies.
Addressing the seminar, Iranian Cultural consulate, Ehsan Khazaei said, Before the Islamic revolution, when Imam Khomeini was asked,how he wanted to overthrow the monarchy and fight the United States, Imam said, by the children of today those will be the youth of tomorrow.
Director General Khana Farhang, Rawalpindi Faramarz RehmanZad while delivering the welcome address said that Imam Khomeini (RA) was a great Arif( Sufi) who was able to live with a unique and simple lifestyle as a great leader like the prophets Hazrat Muhmaad(PBUH) and the Ahl al-Bayt(AS)
Allama Arif Wahidi, Secretary General of the Shia Ulema Council of Pakistan, while addressing the seminar, said that Imam Khomeini during his simple life only defended Islam and it did not matter to him that his opponent was the United States. Imam Khomeini also called for unity and emphasized Islamic unity between Shiites and Sunnis.
Addressing the seminar, Maulana Haider Alvi, a religious scholar, said that Imam Khomeini (RA) had convinced the world through the Islamic Revolution that this revolution did not belong to the East or the West but was an Islamic revolution. He said Iran is the only Islamic country in the world where Islamic law is in force.
Razia Naveed, Head of the Women’s Department of Minhaj-ul-Quran International, said that Imam Khomeini (RA) did not raise the slogan of neither Eastern nor Western, which caused a stir in the world powers and attempts were made to remove them from the path. Imam Khomeini defeated world powers with his tireless efforts. In the eight-year imposed war by the regime of Saddam, Imam Khomeini (RA) fought the world powers with the help of  people of Iran. Razia Naveed said that Imam Khomeini (RA) made it clear to the world that religion and politics are intertwined. The whisper of revolution is also being heard in Pakistan.
Law expert Abdul Qayyum Raja said that the West, which claims to be a democracy, is against the implementation of democracy in Islamic countries. The West opposes the Islamic democratic system in Iran. Despite forty years of tough economic sanctions against Iran, the people there have bee still resisting With a revolutionary spirit because the revolution of Imam Khomeini (RA) has touched their hearts.
Dr. Aftab Naqvi, Dr. Muzaffar Ali Kashmiri, Elder Shah Al-Azhari, Anjum Khaliq, Tatheer Alam Rizvi and other speakers also addressed the function.