Mangaluru, Jun 14: Police commissioner N Shashi Kumar held talks with Muslim religious leaders of the city in the wake of messages going viral on social media of holding protests in the city in similar manner to the protests that are being held all over the country against the derogatory statement given by BJP spokesperson on Prophet Mohammed.

Speaking to reporter after the meeting, Shashi Kumar said, “Messages in some social media groups said that protests similar to those held all over the country need to take place in Mangaluru also. Some Muslim leaders had expressed concern over this. So the meeting was called. Around 60 leaders participated in the meeting and assured of full cooperation to maintain peace and harmony. 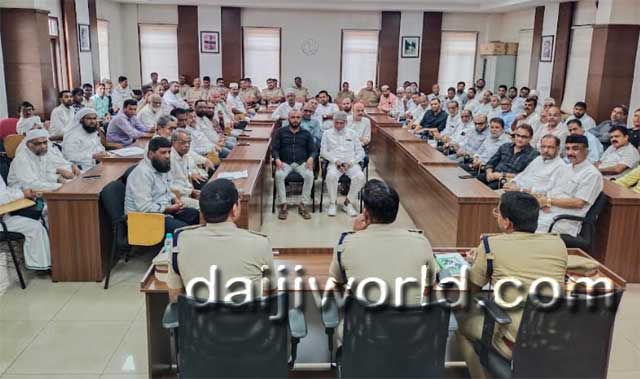 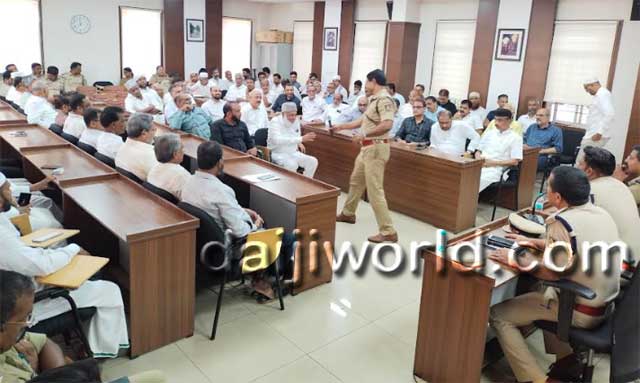 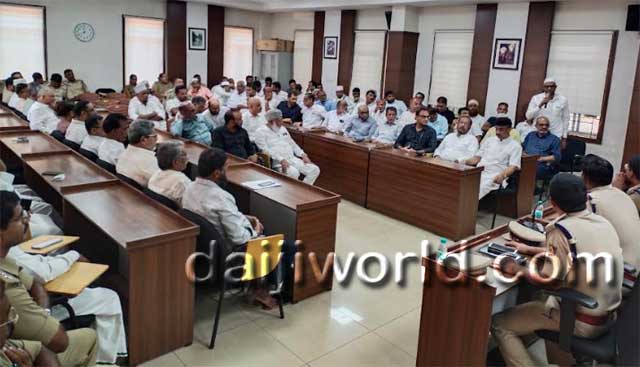 “The Police department is aware of miscreants giving wrong information to the community sitting at a distant place with the intention of provoking the religious sentiments. Action is already taken against many. No one should listen to this rumours,” he said.

Muslim religious leaders clarified that no discussion with regards to holding protests in the city were held during the meeting.

Shashi Kumar further said, “These kinds of meetings are being held regularly at police station levels and zone levels. Religious leaders have requested to hold such meetings frequently. The process of setting up youth committees at station levels has already begun. Contact will be kept with all communities in the society.”

Muslim religious leader B A Mumtaz Ali said, “Our faith in administration is increased as the city police commissioner called meeting and discussed the matter with us. We have suggested him to call meeting of both communities. We also assured the commissioner of our fullest cooperation to maintain peace and harmony in the district.”

“Peace meetings of this nature were held in the past also. We are happy that the police have taken the leaders of Muslim community into confidence in this matter,” said Hyder Parthipadi.

Leader Abdul Hamid said, “Due to the developments that have taken place of late, Muslim community is concerned as well as chaos are created in society. The action taken by the city police commissioner to contain this is appreciable. We will always cooperate to maintain peace and harmony.”

Government should come up with strong measures that all heroes of hate speeches should be behind bars be it any one of any community and it should send strong signal to all. It is unfortunate that all tom dicky harry all trying to become big heroes not by doing something good but with destructive ideas like hate speeches and trouble making. It is better to have enough patience to withstand all hates and go ahead with good works in life. Strong society can be built with higher education and employment.
truth u cannot digest. v all know who added fire 2 da fuel by boycotting goods & threatening repatriation yet scared of it.
Good move but Commissioner should call meeting to other side too (hate monger provocative speech people, instigators bla bla)
This is how a just police force acts. Taking people into confidence. If few yrs ago, IAS Harsha PS had put in the same efforts, 2 innocents wud not have died, hundreds of people wud not hav been injured. But i think his force were enjoying triggering guns at muslim crowd
ONLY ONE SIDE PEACE OTHER SIDE HATE SPEACHES NO PROBLEMM
hate speeches r on both sides
And in between there are some adding fuel to fire !!
Nupur Sharma is not being arrested. As per the law, she should be arrested the FIR lodged aginst her. She has not been arrested for so many days now. Why don’t you arrest her and take legal action against her? Who is stopping you?
You have any comment on Owaisi brothers?
At the first instance, Law of the land must be applied on Muthailik & Kalladka Prabhakar.
Law talking to communities is fine but will not have lasting solution… Initiative must come from so called divisive leaders who are maintaining golden silence…
It is best that protest don’t happen when people are very angry. Though protest are a constitutional right and they may start in a peaceful way, but some unsocial elements hijack the protest and it becomes violent.
To be honest the protests went overboard now. Govt got reprimanded by the Gulf nations … Both Jindal and Nupur were sacked. Both apologised … Both booked. Khalas. Law will take its course now. Prophet Muhammad (PBUH) will always be the great man. We shouldn’t be bothered about so called “cherry pickers” and “one liners” who try to defame him.
great thought…khaash if the same was thought by the saffron gangs…india would have been a better and peaceful country..
Had police taken same action against all other groups there would have been absolute peace in Mangalore.
People should ignore these religious dramas played by politics
khaki should also call hate mongers like borewell and co and hold talks….
I appreciate Kuwait govt deportation action those who involved in protest.
there is no need for anyone to appreciate the move of kuwait or any other GCC countries…they know how to handle third world country citizens..
Jeevan, Kudla. Kuwait authorities are not deporting anyone. On the contrary they are trying to find out the journalist who spread this fake news.
The police department should take copy of public speech and press conference of politicians and all Sangha. The hate speaker should be detained immediately for better ment of society
The police department should take copy of public speech and press conference of politicians and all Sangha. The hate speaker should be detained immediately for better ment of society
peaceful protests r welcome in a democratic country 4 any reasonable cause. concerning 2 nupur sharma’s remarks on muhammad was true. non-islamists should refer authentic book of sahih bukhari 5134.
Disclaimer:
Please write your correct name and email address. Kindly do not post any personal, abusive, defamatory, infringing, obscene, indecent, discriminatory or unlawful or similar comments. Daijiworld.com will not be responsible for any defamatory message posted under this article.
Please note that sending false messages to insult, defame, intimidate, mislead or deceive people or to intentionally cause public disorder is punishable under law. It is obligatory on Daijiworld to provide the IP address and other details of senders of such comments, to the authority concerned upon request.
Hence, sending offensive comments using daijiworld will be purely at your own risk, and in no way will Daijiworld.com be held responsible.
Daijiworld Residency,
Airport Road, Bondel Post,
Mangalore – 575 008 Karnataka India
Telephone : +91-824-2982023.
General Enquiry: office@daijiworld.com,
News & Info : news@daijiworld.com
Kishoo Enterprises,
3rd Floor, Mandavi Trade Centre, Kadiyali, Udupi – 576 102
Telephone : 0091-820-4295571
E-mail : udupi@daijiworld.com
Daijiworld Middle East FZE,
P.O.Box: 84772, Dubai, UAE
Tel: 971-50-6597629
Fax: 971-4-2639207
Email: dubai@daijiworld.com
Copyright &copy 2001 – 2022. All Rights Reserved.
Published by Daijiworld Media Pvt Ltd., Mangalore.
Powered by ATC Online LLP