TEHRAN, May 29 (MNA) – Hamas spokesperson Fuzi Barhum said that the whole of Palestine has become the scene of a united battle in defense of Islamic sanctities.
“The Palestinian people today have started a holy battle in Al-Aqsa Mosque so that the occupying forces and the settlers cannot penetrate it,” Barhum said in an interview with Al Mayadeen in reaction to the Flag March ceremony of the Zionists on Sunday.
The battle with the occupiers should take place on all axes of Resistance and at all levels, he added.
Hamas’ spokesman also called on the people of the Arab world and the Islamic Ummah to stand by the Palestinian people and enter the battle for the liberation of Al Quds, Al-Aqsa Mosque, and the whole of Palestine.
Palestinians demonstrated in several areas of the Gaza Strip in protest of the flag march, warning the Zionists by saying that the Al Aqsa Mosque is their red line. 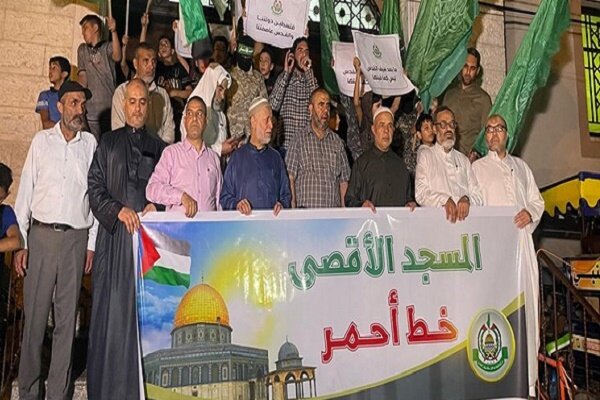 Hours before the start of the flag march, groups of Zionist settlers on Sunday entered Al-Aqsa Mosque under the strict security measures of the Zionist regime’s police.
Meanwhile, the Zionist regime forces were stationed in different parts of the Al-Aqsa Mosque, imprisoning the Palestinian worshipers inside the mosque and preventing other Palestinian citizens to enter.
Palestinian resistance groups have warned the Zionist regime not to hold the ceremony.
Last night, Ismail Haniyeh, the head of the political bureau of the Hamas Islamic Resistance Movement, issued a stern warning against holding a flag march.
The flag march is an insulting ceremony and marks a day in 1967 when the Zionist occupiers were able to completely occupy Quds.
MP/FNA14010308000314/FNA14010308000270
کپی شد
© 2017 Mehr News Agency. All rights reserved